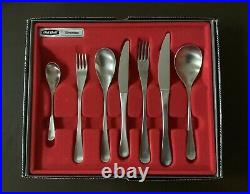 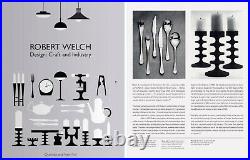 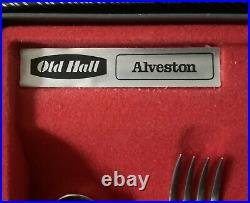 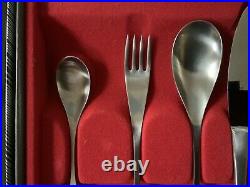 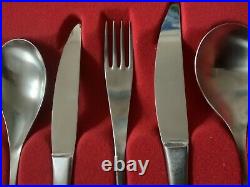 5 sets are available each at set price. Please note price is for one box of 7 pieces. These are rare examples of original, unused boxed sets of Alveston cutlery. Generally classed as new-old stock they are in their original packaging which is in good, but slightly scuffed condition. This is a classic, and sought after design by Robert Welsh. Examples of this item, in its packaging as here, are held in the Victoria and Albert Museum. Alveston won the Design Centre Award, 1965. Following the Campden pattern of 1957, this was the second range of cutlery designed by Robert Welch to be made by Old Hall Tableware.

From 1952 to 1955 he was at the Royal College of Art, after which he was appointed as design consultant to J. Wiggin of Bloxwich, manufacturers of stainless steel tableware. Throughout his career he undertook many industrial design commissions (he designed the stainless steel tableware for the Orient liner Oriana) while continuing to practise as a silversmith. It was in August 1961 that Old Hall decided to add a range of high quality stainless steel cutlery to its products, commissioning Robert Welch to design it. Mr Welch decided to work within the classical Georgian idiom as he felt that the tendency during the past 10 years for short, stubby prongs on forks had gone far enough and that the length of cutlery should be increased rather than diminished, as is often the case today.

He then made a number of prototypes in stainless steel and finally produced a place setting which was put out for user tests. The main characteristics of the set were that the table spoon had a deep and narrow bowl; the knife had a blade that was longer than is usual in stainless steel cutlery; the dinner forks had four prongs instead of three; and all the pieces had rounded ends to their shanks to fit comfortably into the palm of the hand, while all the forks had roots put into their prongs for easy cleaning. After a few modifications to these prototypes, notably to increase the thickness of the knife handle, another set was made in the designer's workshop from which the tools were cut. Robert Welch also designed a pack to hold one place setting, using a vacuum formed polystyrene mould for the cutlery and a transparent cover.